Just south of the pier in Trinidad Bay is Prisoner Rock, a rocky island covered with vegetation and home to elephant seals and California sea lions. Why the name ‘Prisoner Rock’? According to local lore, the name dates from the 1880s when drunks were left out there to sober up. The more plausible explanation is that fishermen were often stranded on the rock when high tides cut off their return to shore. 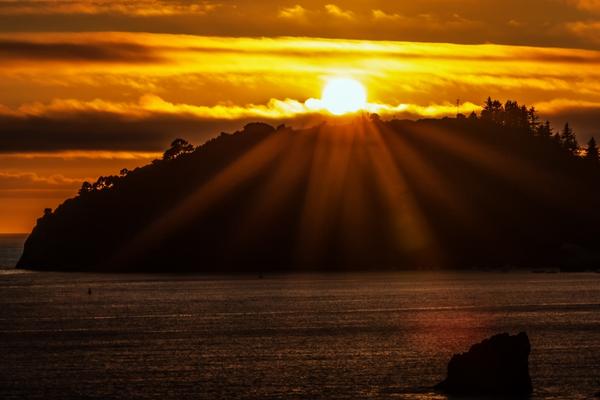 As for the vegetation, it is a couple of varieties of edible groundcover known as Ice Plant and Sea Fig. Sailors made a jam from these plants to avoid scurvy – the leaves are full of vitamin C. The plants make good crispy salad greens and pickles. They contain so much moisture, they can even substitute for drinking water.

When you reserve your stay at Emerald Cabins & RV, you won’t have to make your dinner from the plants on Prisoner Rock because there are plenty of restaurants and farm markets nearby. Not only that, but also Prisoner Rock Charters will take you directly to the fish, so you can catch your own fresh, delicious feast.

Call Captain Jason to charter his services and his ocean sportfishing boat, a 26′ Glacier Bay Catamaran, known as The Black Cadillac. He will take you directly to where those wily fish are biting. Five Stars from everybody for Prisoner Rock Charters. Here’s one of them…

“Went with the family on a morning trip. Jason was very responsive and knew where to go for fish. Got our limit in a few hours (6 of us) and he cleaned them all for us on the dock. Highly recommended. Thanks Jason!” ~ Thad B on Google Reviews

The Fish in Trinidad Bay and Beyond Prisoner Rock

Plus! There are many species of fish and crustaceans that hang around the pier and Prisoner Rock. Call Prisoner Rock Charters at (541) 749-0145 to make your ocean sport fishing dreams a reality!

Or take your camera to get great pics of Prisoner Rock from the pier when you book your stay at Emerald Cabins & RV.

Stopped here only for a night but what a great experience it was! Facilities were very clean and up to date. The whole resort is tucked under towering trees and even has a little creek running through it. Check in was smooth and pleasant. Would love to stop through again!

Great place to camp! The people are nice and everything looks and is clean. Easy to reserve a camp site over the phone. Pulled to the front office and took no time to get our camp site! I would recommend this place to anyone trying to camp around this area.

This is a gem in the Redwoods. It takes tents, motorhomes, whatever you have. We stayed in the cabin. It was gorgeous, well kept clean, it was well done. We will return more often. Especially in the rainy season when we can really enjoy the Redwoods. It was great!

This place was fantastic! It was the perfect home base to see elk, redwoods, and the beautiful Trinidad coastline. Sites were private and the facilities were up to date and sparkling clean. We would absolutely recommend this place and will stay here again if we are back in the area! Thanks for such a good experience!

This was one of the best lodging experiences of our lives. A perfect little cabin amongst some amazing redwoods with dramatic coastlines close by. Definitely recommend making this the home base for your redwood adventure.

Join our Newsletter for Special Offers and Updates!